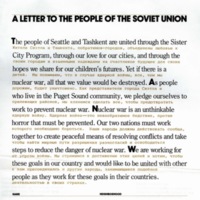 A Seattle peace activist group travels to Tashkent to advocate for peace and unity during the Cold War. However, this group faced several barriers that included the criticism at home, justifiable fears, and deep unknowns. Second, however, this story also provides an example of how a brave and determined group might be able to overcome such barriers. 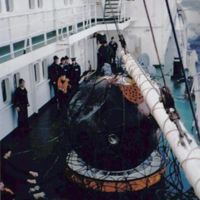 In 1991, the collapse of the Soviet Union signaled the end of the Cold War and changed the landscape of international relations, especially between former adversaries. Shortly after the dissolution, private individuals from the United States and Russia collaborated on a historic step to repair relations damaged by nearly fifty years of tension.

The result was a commercial spacecraft mission named Europe-America Space Flight 500, a pivot point between two influential periods of history. A peace rocket utilizing former Soviet military technology, filled with souvenirs advocating for peace, and promoting business connections, Space Flight 500 was a remarkable symbol of cooperation between both nations in the new post-Cold War era.

Public Tenacity: Give Peace a Dance 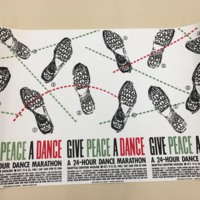 In 1983, a new push from Seattle peace activists emerged in order to resolve geopolitical tensions between the Soviet Union and the United States.

Towards the beginning of the Cold War, citizens were urged from the government to construct shelters as a protective method against the threat of nuclear war. This can be labeled as one of the “responsibilities of American life in the atomic age.”[1]

However, there was a decline of faith in these backyard bunkers within the 80s, as many desired to remain safe by preventing the war instead. In a year like 1983 when Ronald Reagan announced his "Star Wars" missile defense initiative and the Soviet Union shot down the civilian airliner KAL007, many Seattle residents responded accordingly.

Yet most of the city's other peace initiatives of 1983 did not last, fading away as the dangers seemed to not be imminent. Fortunately, the Give Peace a Dance event is the major exception to this pattern, which demonstrated a long-lasting power through 1990.

During the Cold War era, Seattle was uniquely equipped to engage in Cold War peace activism. Examples such as the establishment of the Seattle-Tashkent sister city relationship and the hosting of Target Seattle showcase that the Pacific Northwest was a region willing to engage with sensitive subjects.

Promoting peace was also present on a smaller scale, especially through economic relationships. One good example of smaller scale activism is the Marine Resources Company officially established in 1978. 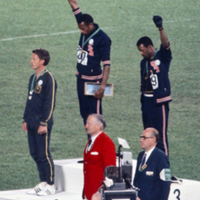 How the Cold War political climate created the Goodwill Games and the inescapable nature of politics in the time period. 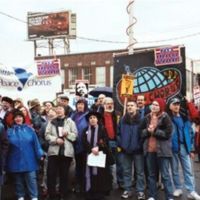 The mission of the Seattle Peace Chorus is to communicate through music the desire for a just and peaceful world; to consistently present this message through choral excellence and nonviolent activism; to celebrate life in all its diversity; to build and sustain harmonious relationships and cultural bridges locally and globally.

Educational Exchanges: Accent on Understanding's Impact on the Future 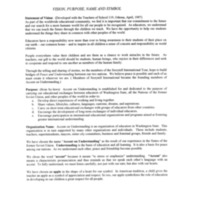 Accent on Understanding was a non-profit, 501(c)(3)-designated organization in Washington from 1987 to the early 2000s that facilitated teacher and student exchanges between the United States and nations part of (and formerly part of) the Soviet Union. Due to the attitudes of the members of Accent, and the period in which Accent was operational, their efforts seemed to focus on the future of relations between America and the nations that made up the Soviet Union. 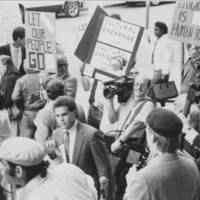 On the map above, there are several marked places that represent the locations where Jewish human rights groups protested Soviet Union's authoratative control. They specifically advocated for the freedom of Soviet Jews as many Soviet Jews lacked the same fundametal rights as other individuals. Looking closely at the map, the marks are different colors. The blue represents democracy and freedom and the red represents communist control. In addition, many of the marks are concentrated in Seattle as several Jewish human rights protests took place in this city!

Exactly who are these Jewish human rights groups, what were the different ways they protested, and how were they similar/different to Jewish peace activist groups? 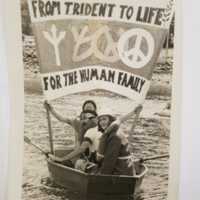 During the 1970s and 1980s the arrival of submarines armed with nuclear Trident missiles at the naval base in Bangor, Washington was depicted as a strategic neccessity by the US Government and the Navy to keep pace with the military developments of the Soviet Union.

However, despite the official stance of these missiles as an effective deterrent against Cold War adversaries, the close proximity of these devastating weapons to the city of Seattle amid reemerging Cold War tensions became a cause of great concern for anti-nuclear activists as well as local residents.

As a result protest groups soon formed, not only out of concerns for personal danger, but also to challenge the morality of these weapons and address possible repercussions of their use. These groups included the Pacific Life Community and the Ground Zero Center for Nonviolent Action. 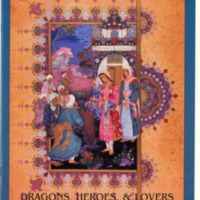