To celebrate the historic landing of Europe America Space Flight 500 the Russian and American organizers had scheduled a number of functions between November 22nd and November 30th. These exchanges emphasized personal interaction between Russian VIP guests and Seattleites, and focused on the cultures of Russia and the United States.

The choice of celebrations for Space Flight 500 were similiar to those held by a Cold War-era citizen diplomacy group, the Seattle-Tashkent Sister City Committee in the 1970s and 1980s.

The Seattle-Tashkent Sister City Committee hosted Uzbek delgations, sister city conferences, communication, education, and art exchanges. Due to these events and the tenacity of the Committee's members, the links between Seattle and Tashkent survived the tensions of the Cold War.

Based on the similar events arranged by both groups, a reasonable presumption would be that Europe America Space Flight 500's planners hoped to emulate Seattle's citizen diplomats. Since the mission planned to establish person-to-person relations through nonpolitical interaction, the lasting success of the Seattle-Tashkent Sister City Committee bode well for Europe America Space Flight 500's connections to also endure. 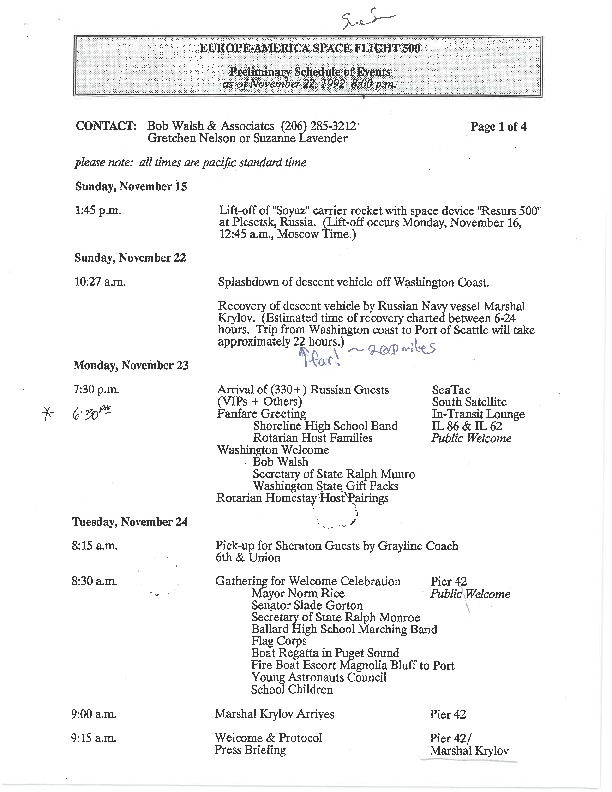